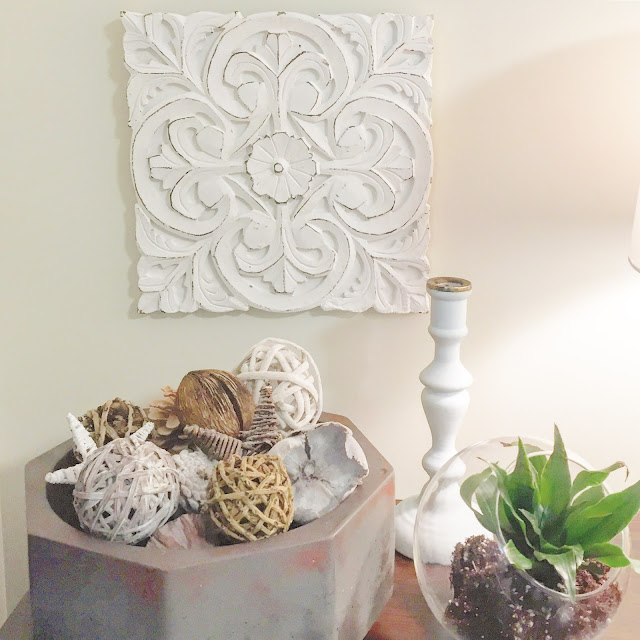 So many of my favourite ladies are prego right now.  When one of them asked me to help her style her guest room, so that her mom had a nice place to stay when she came to help with the baby, I was really excited to help.  This project was finished very quickly. It took two weeks, and only three visits, to complete because it was purely a style make-over.  My friend, Amanda, started the whole project with three curtain options, and once we chose the curtain the rest of the room was inspired by those colours.  The nice thing about the room is that it was a blank slate.  The walls were a creamy neutral colour, which is perfect for a basement bedroom that doesn't have a tonne of natural light. 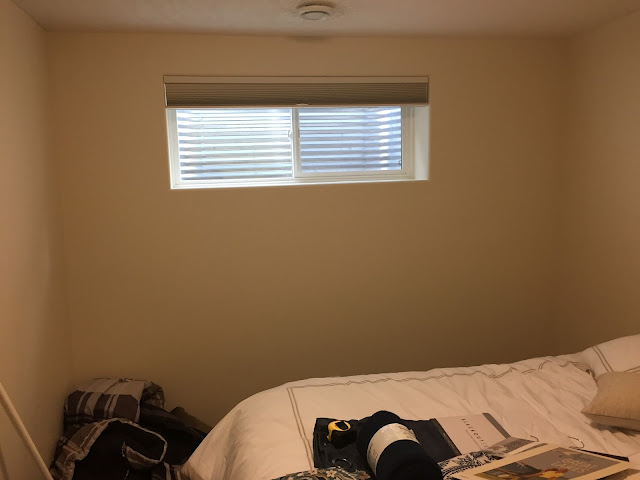 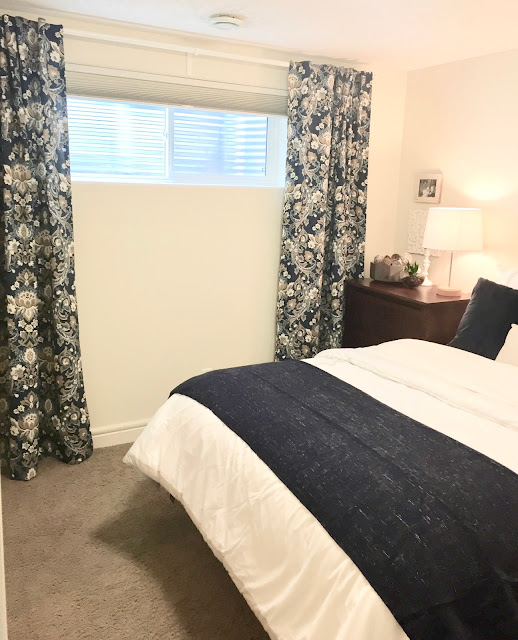 Amanda wanted to add a dresser and some nightstands, and had already decided on the Brusali line from IKEA.  Since the room is on the smaller side, I suggested we get two three-drawer dressers and use them as night stands, instead of getting one three-drawer chest to be on the wall and two smaller night stands.  This enables a tonne of storage and opens the room up by not needing extra pieces of furniture in the room.  Amanda found the bedside lamps on Kiijiji, and most of the accessories were either in her house already or were from my goody pile.  To give the room the feeling of having a headboard we added cushy pillows and a piece of art above the bed.  Amanda might add a headboard in the future but for right now there are lots of comfy pillows for her guests to lie on and it feels finished. 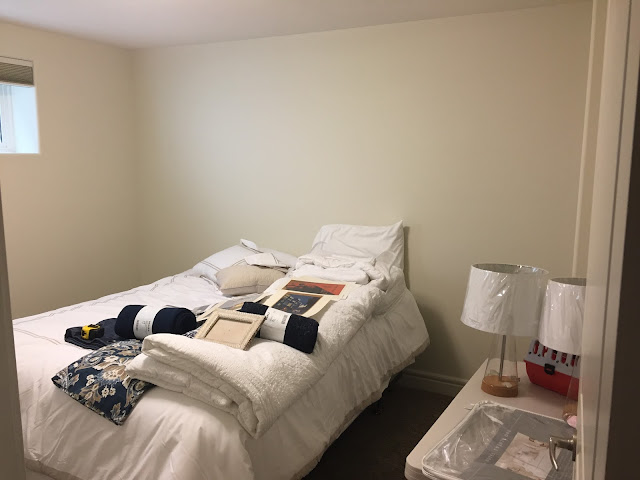 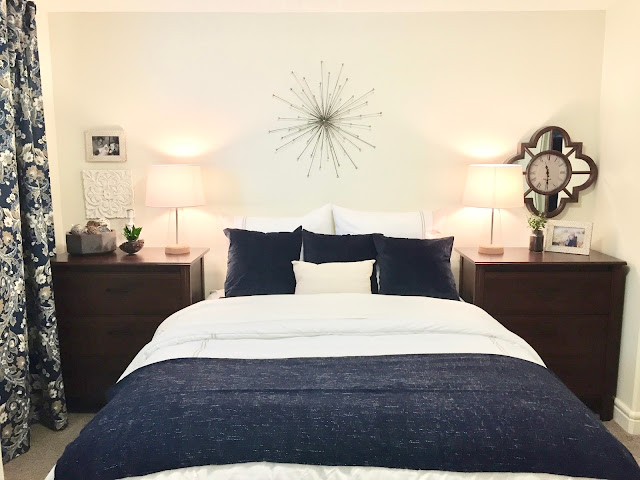 We added a full length mirror painted a creamy white, found off Kijiji, so that her guests have a place to check out their outfits, and the piece of art above the hooks was from a calendar that Amanda had been looking to use for a while.  We framed it in a picture frame that I got from a Goodwill clearance centre and it cost $1.00. 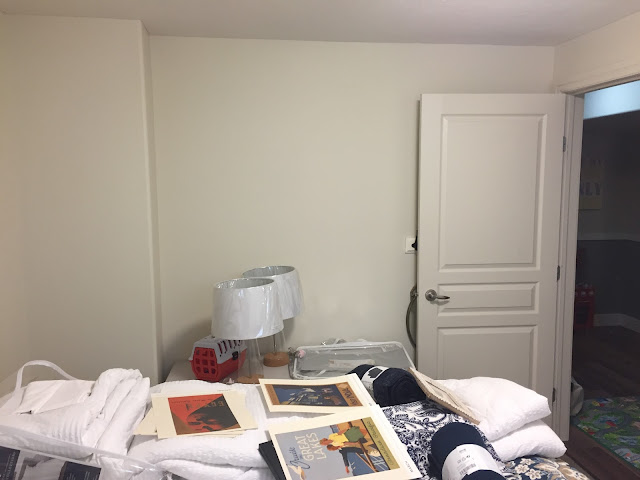 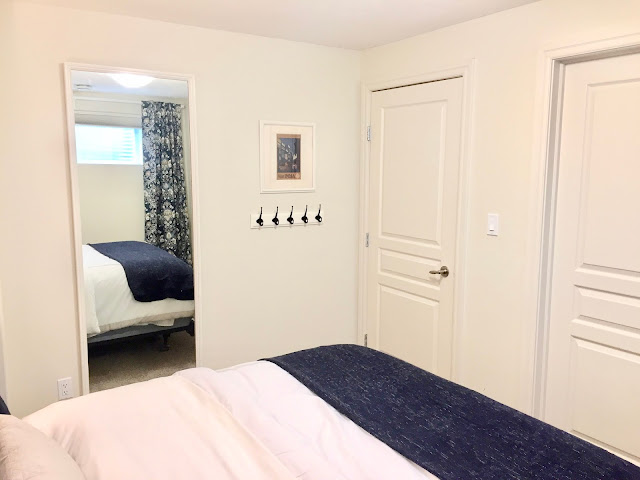 The only other blank wall was the wall with the doors, and I had a perfect piece.  I bought it at Home Sense on final clearance.  It was $7.00.  The glass was gone and the frame has a tiny crack that you can't see but the piece was originally $170.00 and the stone is the perfect colour for the space.  Amanda's daughter wanted to steal it for her room, and I honestly love it so much, but it has been sitting in my house waiting for the perfect space and I think this is it. 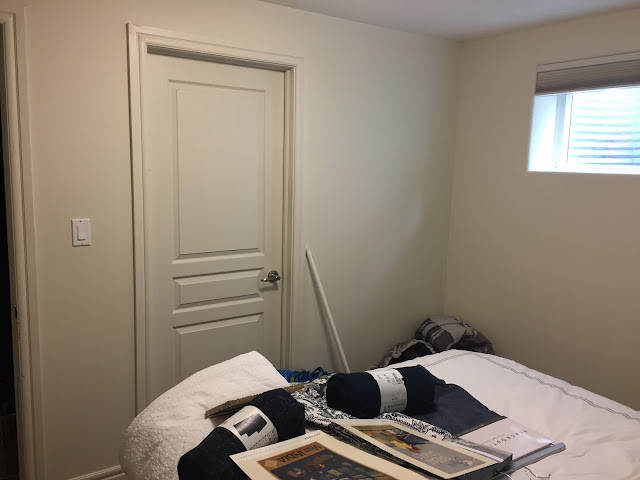 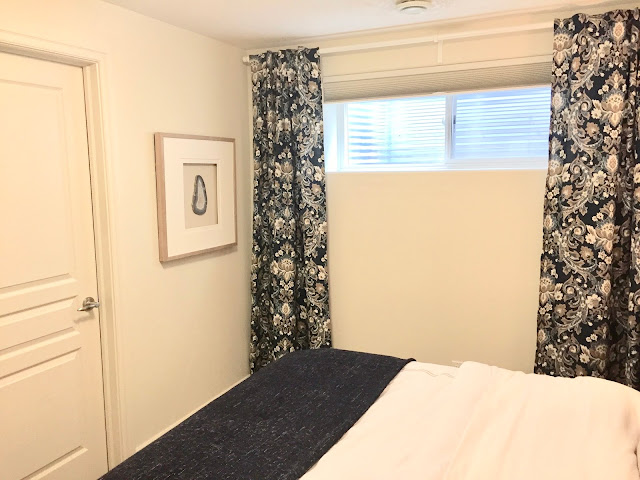 This was so fun to do, not in the least because Amanda is a such a wonderful friend and we got to chat while we worked.  Hopefully this will be a restful place for her guests to sleep.  Thanks for stopping by! 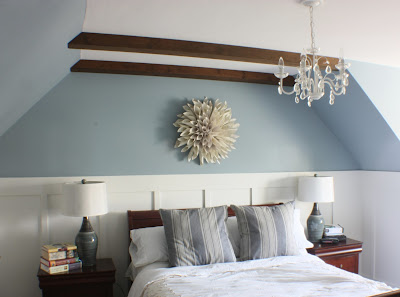 You know when you are brainstorming ideas for your new business with your friend and she mentions that you could use her bedroom as your first project and then you both erupt into joyful cheers while the husbands shake their heads?  That was how this bedroom transformation began!  My friend Anna-Lisa's bedroom was fine.  It was a generic bedroom that needed an update and a dose of my fine friends' personalities. It looked like this: and this: and this: Not bad, right?  However, does it show off the fact sthat my dear Anna-Lisa LOVES reading and cats and colour, and that her husband Scott is a brilliant carpenter who has every Tolkien book ever written, and who also happens to be willing and able to do any project his wife asks of him?  No it doesn't.  Anna-Lisa had dreams of a peaceful space to just be.  Her words.  I also wanted to create a space that reflects them.  This room redecorating really blossomed into something special because of 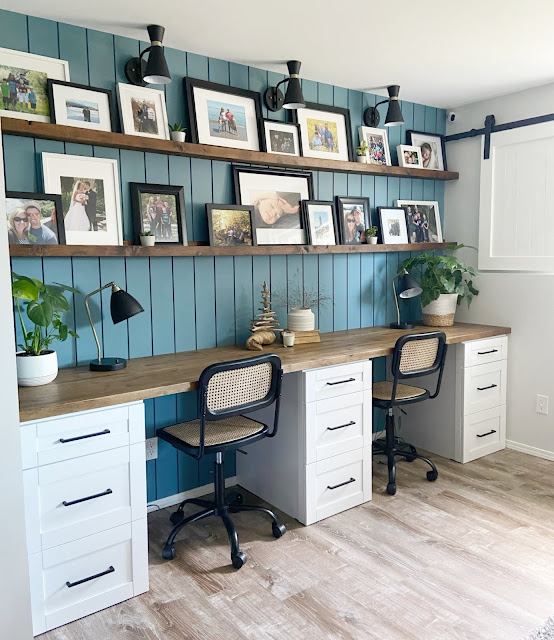 Last Christmas a dear friend of mine asked her husband for a design plan from Reclaiming Home as her gift.  She wanted to update their basement family room, since it had not been done since the house was built.  I have spent a lot of hours hanging out with these wonderful people in this room, and I was excited to be a part of it. In January I presented their design plan, over the course of 10 months they renovated it, and a few weeks ago I got to go in and style it and put the finishing touches on it.  It is so gorgeous and I am so happy with the way it turned out. I hope you enjoy the before and after pictures as much as I do!  Before: After: Let’s start with the major changes in this room.  My friends ripped up the vintage carpet and replaced it with Luxury Vinyl Tile (LVT), they scraped the popcorn ceilings, painted, updated the fireplace, and made barn door window coverings. However, they kept the main pieces of furniture in this part of the space.  Fun fact: my husband LOVES the 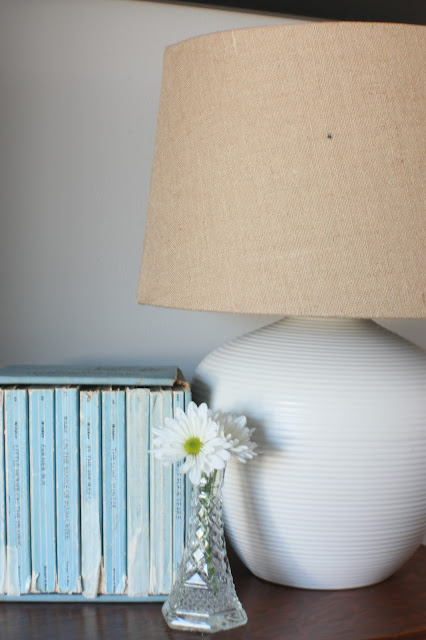 A Makeover in Swift Current

Let's take a road trip to Swift Current!  Swift Current is about a seven hour drive away from Edmonton, and it is where Nicole and Logan live.  When Nicole was interested in working with me, we realized that, if we did a lot of prep ahead of time, we could transform her space over one weekend.  So after months of prepping and planning I headed out to Swift Current with a packed truck, and a good friend by my side. 14 hours of driving, 16 hours of work, and several bottles of wine later, Nicole's living room/entryway and master bedroom were completely different spaces. Nicole is a teacher and Logan is a carpenter.  They recently decided to stay in their current house after debating about moving to a new build.  Since they are planning on staying here for a longer period of time than they had originally thought, Nicole wanted it to feel more like home.  She was pretty open to any style, but based on her Pinterest boards it was clear that Nicole likes warm, cozy, inviting s